He has boiled hundreds of eggs in the quest for breakfast perfection. He has expended thousands of words on the divisive subject of mashed potatoes. And he is the only one who cares enough to test absolutely every possible shape of pan you could ever cook with. In this episode of Gastropod, we interview the ultimate food nerd: J. Kenji López-Alt. 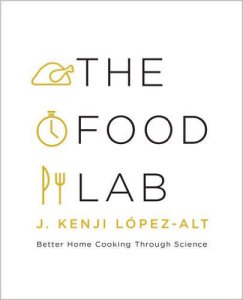 López-Alt trained as a scientist before working as a chef, and he has dedicated the past six years to "unraveling the mysteries of home cooking through science" in The Food Lab, his wildly popular column at Serious Eats, which is now an encyclopedic book of the same name. The book contains hundreds of recipes, from the perfect tomato sauce to salmon with basil caper relish, along with instructions for amassing the ultimate set of kitchen tools, and scientific tips for everything from making homemade ricotta to simmering the tastiest French onion soup.

For this episode, we talk to him about the rigorous double-blind experiment he set up to discover whether New York City's water is truly the secret ingredient in its superlative pizza crust. We persuade him to share his secret triple-umami-bomb blend that has everyone who tastes his chili begging him to reveal where he found the beefiest beef possible (Marmite lovers, rejoice!). And finally, López-Alt breaks it to us that we have been doing everything from slicing our onions to seasoning our burger patties all wrong, in ways we'd never even thought to worry about. Listen and learn: this is the kind of science that is guaranteed to double the deliciousness of your next kitchen adventure.

Kenji López-Alt is managing culinary director of Serious Eats. His column, The Food Lab, was launched in 2009: its new online video series is well worth checking out. The Food Lab book can be purchased in your local bookstore or online from September 21, but is available for pre-order here: it's awe-inspiringly thorough and filled with revelatory tips, tricks, and recipes.