In this latest episode of Gastropod, chef and author Dan Barber takes listeners on a journey around the world in search of great flavor and the ecosystems that support it, from Spain to the deep South.

You’ll hear how a carefully tended landscape of cork trees makes for delicious ham, and about a squash so cutting edge it doesn’t yet have a name, in this deep dive into the intertwined history and science of soil, cuisine, and flavor.

It’s hard to imagine now, but there was a time before refrigerators, before long-distance trucks and ships. Most people had to survive on food from their immediate surroundings, no matter how poor the soil or challenging the terrain. They couldn’t import apples from New Zealand and potatoes from Peru, or rely on chemical fertilizer to boost their yields.

From within these constraints, communities around the world developed a way of eating that Dan Barber calls “ecosystem cuisines.” Barber, the James Beard-award-winning chef of Blue Hill restaurant and author of the new book The Third Plate, spoke to Gastropod about his conviction that this historically-inspired style of cuisine can be reinvented, with the help of plant-breeders, his fellow chefs, and the latest in flavor science, in order to create a truly sustainable way to eat for the twenty-first century. 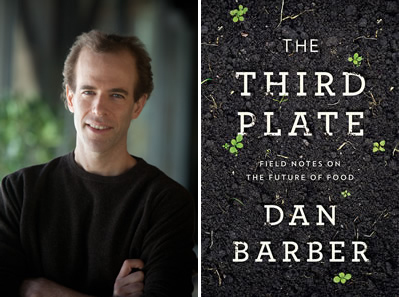 Dan Barber is author of the new book The Third Plate.


Ecosystem cuisines, as Barber explains in this new Gastropod episode, survived in often harsh landscapes for hundreds or even thousands of years because the local farmers cultivated a mutually beneficial community of plants and animals that grew well together, supported soil fertility, and could be combined in ways that still taste utterly fantastic today.

Barber originally became famous for his "farm-to-table" cooking—a style of cuisine that prioritizes serving local, seasonal food, and that has become increasingly popular across America as a sustainable, delicious way to eat. But, as he began to understand how ecosystem cuisines incorporated all the ingredients of a healthy landscape, he realized that the typical farm-to-table chef’s approach of only showcasing a region’s very best local products isn’t really sustainable at all.

For example, Barber told us that the world-famous jamon iberico de bellota, Spain’s mouth-watering Iberian ham, simply could not exist if the local community didn’t also value, maintain, and consume the entire ecosystem around it. This landscape, a carefully tended combination of grasslands and widely spaced cork and holm oak trees, is called the dehesa in Spanish. As Barber explained, despite being a remote region with poor soils and a dry climate, the Spanish dehesa supports a thriving mix of pigs, sheep, and cows, olives, mushrooms, wild game and herbs, wheat—and people, whose dinner plates traditionally reflect all of the landscape’s products, rather than just its superstar ham. 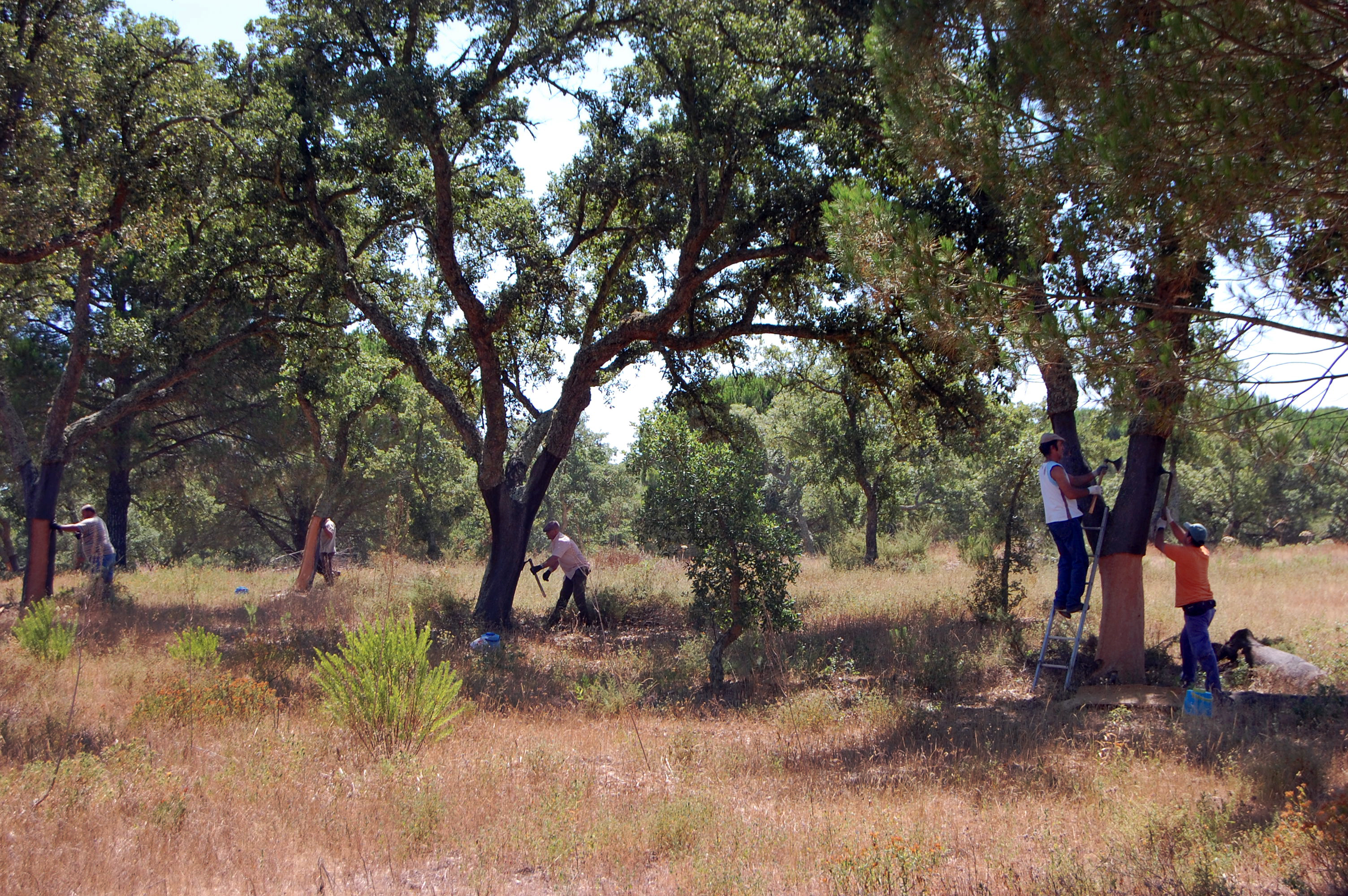 Cork harvesting in the montado, the Portuguese equivalent of the Spanish dehesa. In this region of both countries, the cork oak acorns are eaten by foraging pigs, while the bark supplies much of the world's natural cork for wine bottles. Photograph by Nicola Twilley.


Inspired by the dehesa, Barber has set himself (and anyone who cooks) an inspiring and intimidating goal: to invent thousands of entirely new cuisines for America—cuisines that include all the edible products of a healthy, ecologically balanced local landscape, and are actually more delicious than a cuisine that only relies a region’s best-loved foods.

The first chapter of our conversation with Dan Barber explores the particular environmental and cultural circumstances that helped establish these traditional ecosystem cuisines in the past. But Barber is very clear that he’s not advocating some kind of impossible return to a simpler time. Instead, as we go on to discuss in the episode’s second and third chapters, Barber is working with a variety of scientists at the cutting edge of their fields in his quest for truly great flavor.

In the book, this involves a visit to a futuristic hydrological engineering project in southern Spain, in which the flow of water through a series of 1920s-era canals has been reversed to revive one of Europe’s largest wetlands, creating a perfect habitat for both migrating birds and farm-raised sea bass that Barber describes as among the most delicious fish he has ever tasted. It also involves a series of failures in an innovative attempt to produce ethical foie gras, a bread raised using phytoplankton rather than yeast, and an impassioned argument for increased government support of agricultural research. 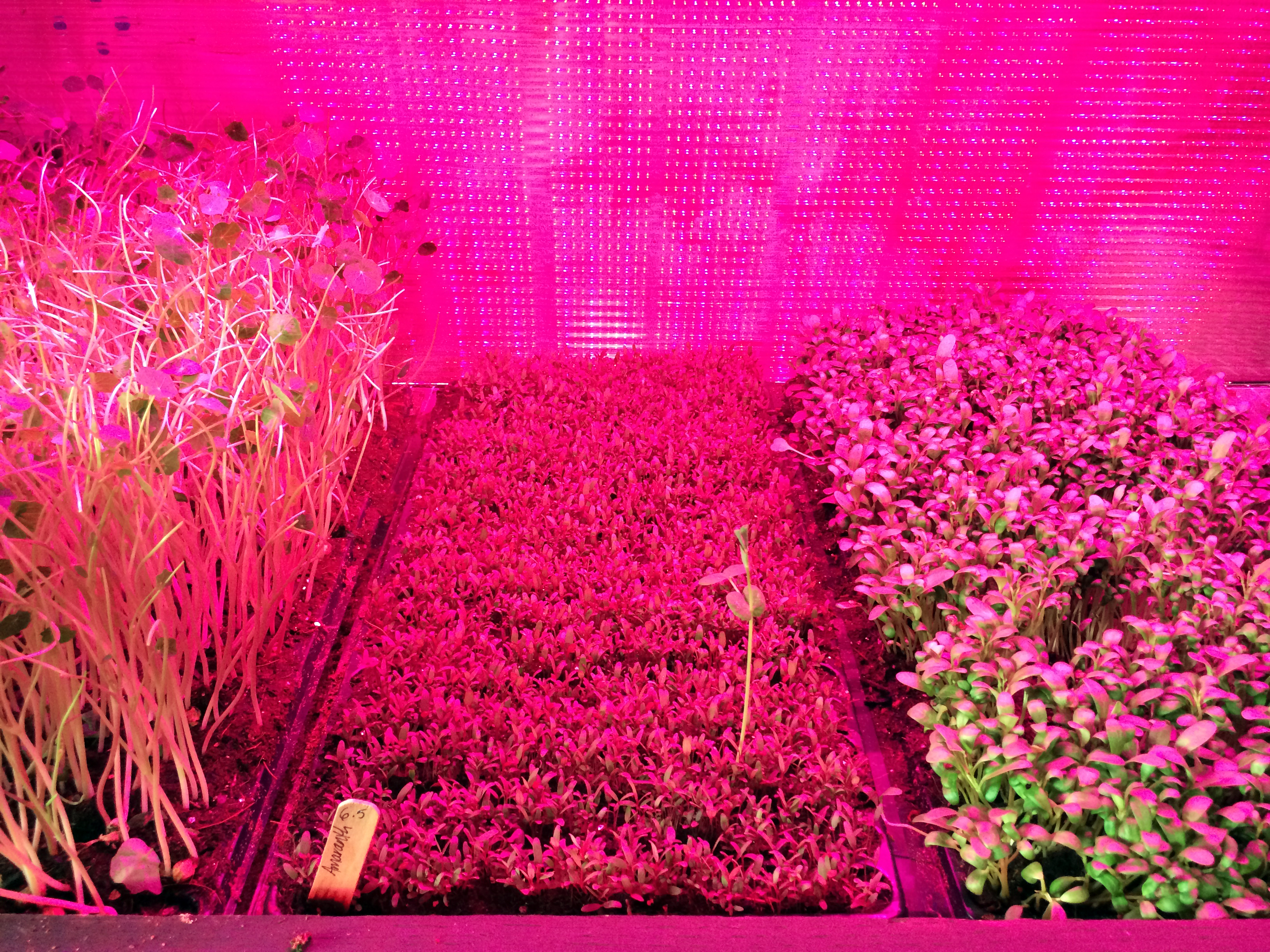 Amaranth growing at the Stone Barns Center for Food & Agriculture, which supplies much of the food that Dan Barber serves at Blue Hill. Photograph by Nicola Twilley. 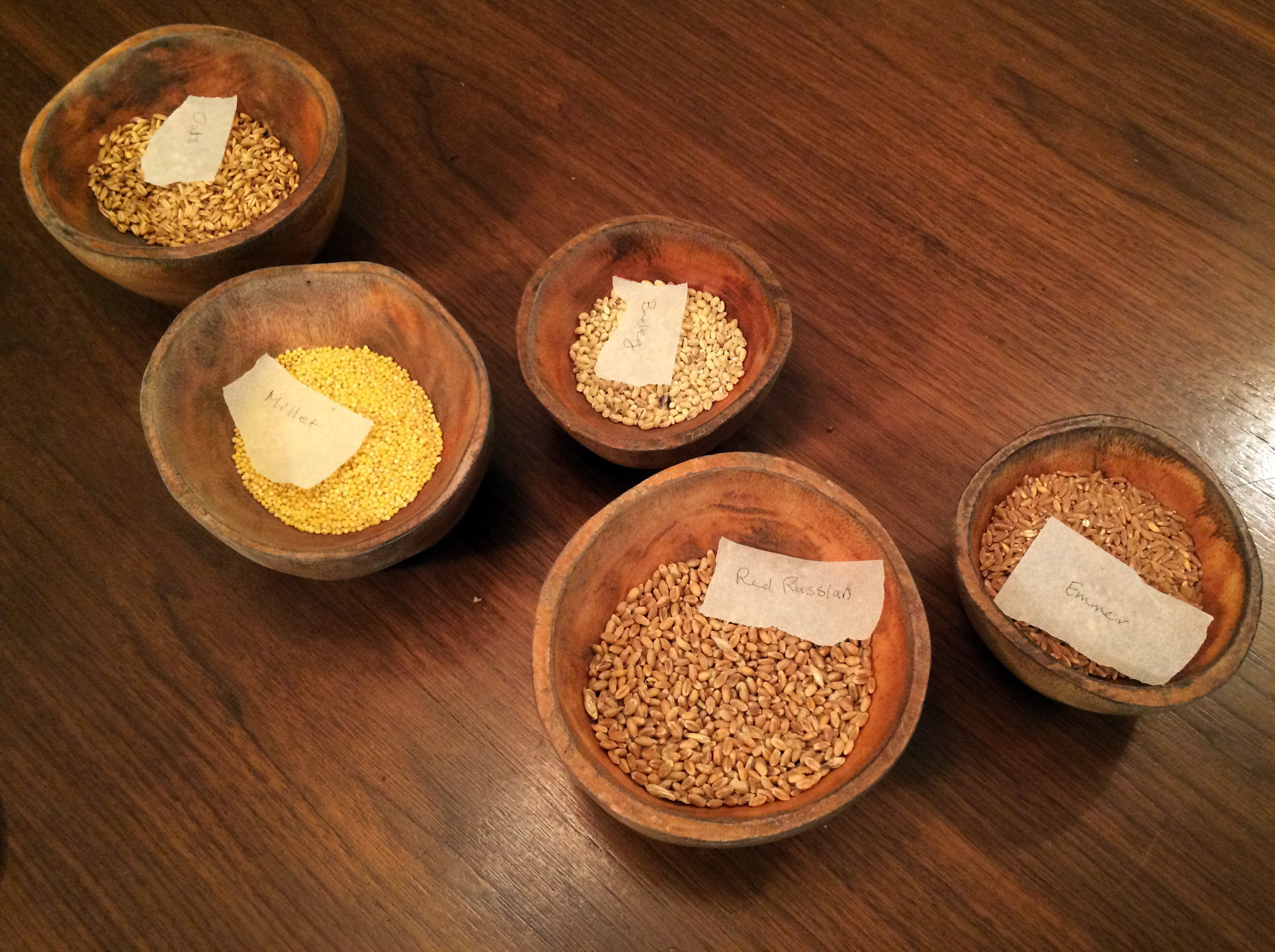 Dan Barber showed us grains from Klaas Martens' farm in upstate New York. After a visit to Martens' farm to source local wheat, Barber realized he needed to purchase and serve the other crops that Martens was growing in rotation on his fields in order to support the soil that grew the wheat. Photograph by Nicola Twilley


In this Gastropod episode, however, we focus on the science behind two approaches to creating great flavor: soil health and plant breeding. With Barber as our guide, we tease out the complicated and little-understood relationship between a soil’s mineral content and the nutrient density and flavor of the crops it supports, as well as the emerging science of microbe-root relationships and plant health.

Finally, we look at what it takes to breed truly delicious crop varieties. Barber introduces us to new squash developed by Michael Mazourek at Cornell University that has yet to receive a name, but is “so delicious that it blows your mind.” Barber’s latest obsession, however, is a new variety of wheat, specially bred by Steve Jones at the Washington State Research and Extension Center to deliver intense flavor alongside high yields and pest resistance. It’s called, to his great delight, “Barber wheat.”

Barber Wheat in the greenhouse (left) and freshly sowed in the fields at Stone Barns Center for Food & Agriculture (right). Photograph via Dan Barber.


Barber is a guest on the latest episode of Gastropod, a new podcast hosted by award-winning science journalist Cynthia Graber and Edible Geography-author Nicola Twilley. Listen to this episode to learn more surprising stories about the history and science of great flavor, including how the American Civil War can be traced back, in part, to a forgotten soil crisis, as well as the shocking research showing significant declines in the minerals in both American vegetables and soils over the past fifty years.

If you like the episode, please consider heading over to iTunes to review the podcast, which not only makes us very happy but also helps more people discover it. And keep tuning in every two weeks for a new episode exploring food through the lens of science and history.

This episode, we owe special thanks to Dan Barber, chef of Blue Hill and Blue Hill at Stone Barns and author of The Third Plate, as well as to Irene Hamburger, the vice president of Blue Hill, and designer Jake Barton of Local Projects, who both helped us connect with Dan. We probably also ought to mention Geoff Manaugh, Nicky's husband and author of BLDGBLOG, who drove us up to Stone Barns and then spent the afternoon recording turkeys for us.

Below are some additional references for stories, people, and places we mention in the episode.

Stone Barns is a nonprofit farm and education center located on the former Rockefeller estate in Pocantico Hills, New York, just a few miles north of Manhattan. It's a lovely place to visit, it hosts lots of educational programs, and, as we mention in the episode, it manages an online hub for beginning farmers called the Virtual Grange. It also hosts Dan Barber's restaurant Blue Hill at Stone Barns.

The Carolina Rice Kitchen is the term used by food historians, such as Karen Hess, who wrote an entire book on the topic, to describe a particular cuisine that defined the Carolinas and Georgia in the eighteenth and nineteenth centuries. It depended on Carolina Gold rice as a staple, and relied on agricultural techniques brought to the region by enslaved Africans to restore fertility to the soil. Glenn Roberts of Anson Mills is largely responsible for its recent revival.

Dirt and the Great Soil Crisis of the 1820s

In Dirt: The Erosion of Civilizations, David R. Montgomery, an earth sciences professor at the University of Washington, devotes an entire chapter to the disastrous management that left the soils of the southeastern United States exhausted and eroded just fifty years after the Declaration of Independence. Montgomery quotes none other than George Washington on the problem, in a 1796 letter to Alexander Hamilton:

It must be obvious to every man, who considers the agriculture of this country ... how miserably defective we are in the management of [our lands].... A few more years of increased sterility will drive the Inhabitants of the Atlantic States westward for support. 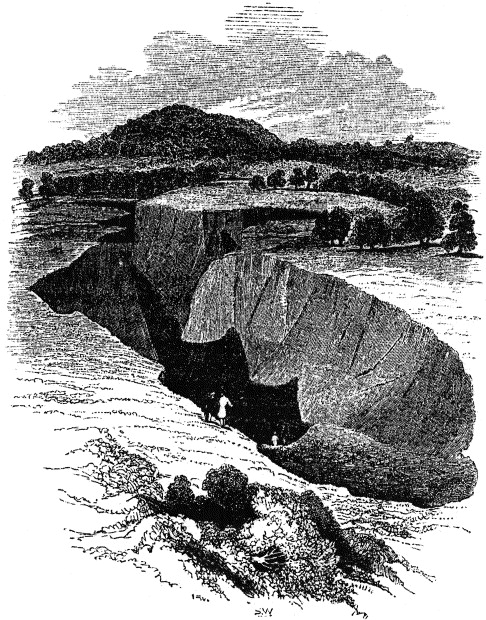 By the 1840s, when the British "father of geology" Charles Lyell toured the South, he was struck by the catastrophic erosion caused by clearing and poor land management and marveled at the stream of families abandoning their farms to move west.

A particularly dramatic gully near Milledgeville on the road to Macon, Alabama, which had eroded from a crack in the soil to 50 feet-deep in the 20 years since the land was first cleared for agriculture, ended up becoming an important case study in his landmark Principles of Geology. In his travel journals, Lyell wrote, "I found the proprietors by no means in a thriving state, evidently losing ground from year to year, and some of them talking of abandoning the exhausted soil, and migrating with their slaves to the south-western States."

Charles Lyell's illustration of a gully near Milledgeville, Georgia, in the 1840s, via David Montgomery's Dirt.

We couldn't resist: here's a recipe for ham in Coca-Cola from the blog South Your Mouth, and an article analyzing the correlation between Waffle House locations and Romney voters.

Soil Minerals and the Dilution Effect

In 2004, Donald R. Davis and colleagues at the University of Texas, Austin, published a study titled "Changes in USDA food composition data for 43 garden crops, 1950 to 1999" in the Journal of the American College of Nutrition, which compared USDA nutrient content data published in 1950 and 1999 for 13 different nutrients in 43 fruits and vegetables, and found significant declines in three of the minerals studied (calcium, phosphorus, and iron) and two of the five vitamins (riboflavin and ascorbic acid). Davis speculates that this decline is an unintended consequence of breeding crops for higher yields, in some kind of genetic trade-off.

The statistic that average mineral levels in North American agricultural soils have declined by 85 percent is widely attributed to the final report of the 1992 Rio Earth Summit, which is quoted as saying that "there is deep concern over continuing major declines in the mineral values in farm and range soils throughout the world." It's (perhaps suspiciously) difficult to find the data on which that statement is based, though Scientific American also argues that soil depletion is primarily to blame for the better documented reduction of nutrient levels in fruit and vegetables:

The main culprit in this disturbing nutritional trend is soil depletion: Modern intensive agricultural methods have stripped increasing amounts of nutrients from the soil in which the food we eat grows.

And, finally, this citizen science project aims to test the relationship between soil mineral depletion, vegetable nutrient density, and flavor (measured by proxy using Brix levels, or the percentage of dissolved solids in the vegetable)—but they have yet to publish any results!