Chances are, you've spent more time thinking about the specs on your smartphone than about the gadgets that you use to put food in your mouth.

But the shape and material properties of forks, spoons, and knives turn out to matter—a lot. Changes in the design of cutlery have not only affected how and what we eat, but also what our food tastes like. There's even evidence that the adoption of the table knife transformed the shape of European faces.

To explore the hidden history and emerging science of cutlery for our brand new podcast, Gastropod spoke to Bee Wilson, food historian and author of Consider the Fork, and Zoe Laughlin, co-founder of the Institute of Making at University College London. Below are some of our favorite stories from those conversations.

First, some history. Consider the Fork is one of our favorite food books: in it, Bee Wilson takes readers on a fascinating journey through the evolution of kitchen technology and its impact on our lives. It's packed with astonishing details that gave us a whole new appreciation for humble appliances such as the can opener and the kitchen timer. Wilson ranges across human history, from the sixteenth-century adoption of the enclosed oven (before then, chefs often worked naked or just in underpants, to avoid catching their clothes on the open flames) to the 1994 "invention" of the Microplane grater, which took place when Canadian housewife Lorraine Lee borrowed a carpentry rasp from her husband's hardware store to zest orange for a cake. 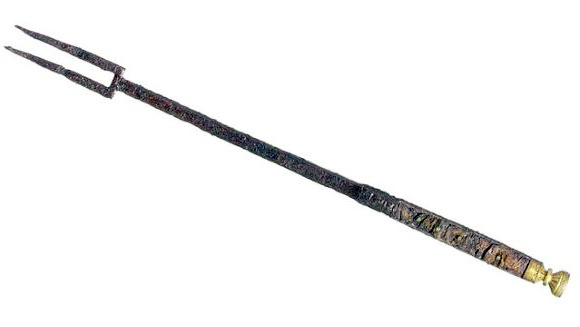 One of the earliest forks in Britain (made between 1587 and 1606), found by archaeologists excavating the site of the Elizabethan-era Rose Theater. Called a sucket fork, it was used for eating sweetmeats, such as dried and candied fruits. Later versions had a spoon at the other end, like a proto-spork.

But it was the chapter on cutlery that really caught our attention. Although it's hard to imagine life without them now, forks are a relatively recent addition to the table—and they weren't a big hit at first. In the sixteenth century, as aristocratic Italians began to replace their single-pronged ravioli spears with a multi-tined fork, the rest of Europe still saw the fork as "this bizarre, weird, slightly fetishistic device," Wilson explained. "Why would you want to put metal prongs into your mouth along with the food? It just didn't seem like a natural way to eat." Indeed, when a Englishman, Thomas Coryate, adopted the fork habit after traveling to Italy at the start of the seventeenth century, his friends—including the playwright Ben Jonson and the poet John Donne—teasingly called him "furcifer," which meant "fork-holder" but also "rascal."

It wasn't until a century later, in the early 1700s, that eating with a fork was accepted across Europe—in part, Wilson explains in the book, due to the transition from bowls and trenchers, whose curves were better suited to spoons, to flatter china plates. That was followed, another hundred years later, by an explosion in fork shapes and a corresponding wave of "fork anxiety." As Wilson described it, the transition to serving meals in a succession of courses, each with a fresh set of cutlery, rather than just laying all the dishes on the table for diners to help themselves, led to the development of specialized "forks for olives, forks for ice-cream, forks for sardines, forks for terrapins, forks for salads"—even forks for soup, though that was rapidly condemned as "foolish," and the soup spoon was restored. 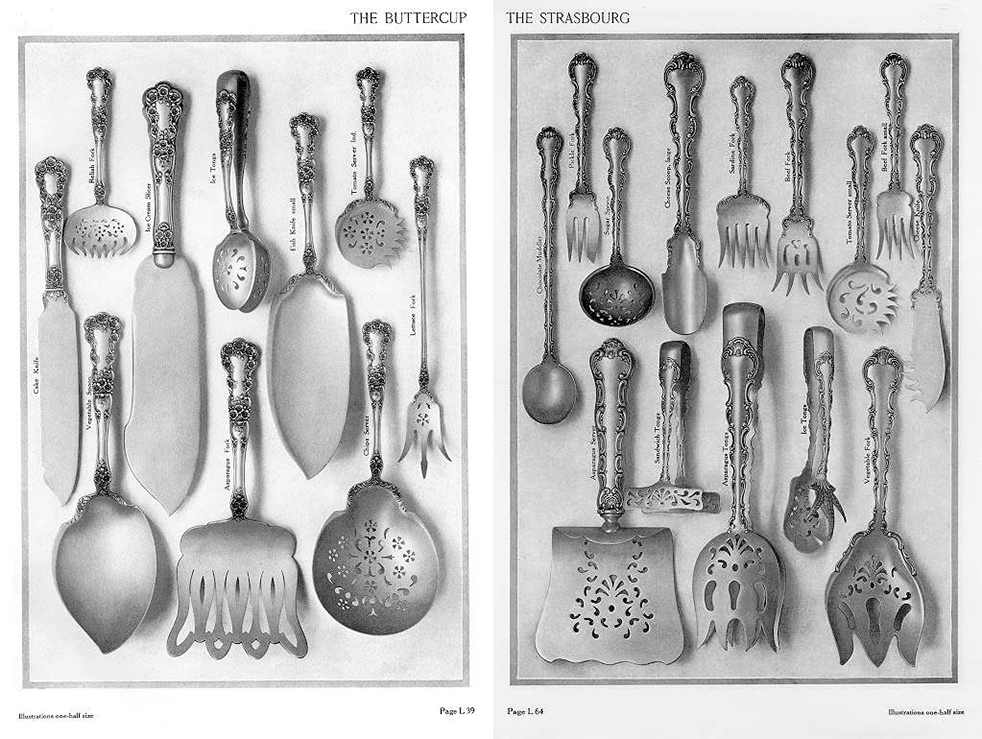 But if forks have a complicated history, the future of spoons may well be golden. Literally. Zoe Laughlin, who confessed to being driven, in part, by a childhood obsession with finding the perfect spoon, has been conducting scientific research into the sensory properties of materials. Working out of the Institute of Making, a London-based cross-disciplinary research club, she started exploring the different tactile and aural sensations of metals. Next, she wondered how metals taste. Scientists had researched this question before, by having people swish metal salts around in their mouth. To Laughlin, that methodology made no sense. We put metal in our mouths every day, in the form of cutlery—why not just do a spoon taste test?

Before long, she had volunteers lining up to suck on a set of seven spoons that were identical in shape and size, but plated with different metals. Her results showed that different metals really do taste different—the atomic properties of each metal affects the way the spoon reacts with our saliva, and so, for instance, copper is more bitter than stainless steel.

Her next step was to figure out how the taste of different metals affects the flavor of food. Working with a top chef, she hosted a spoon-and-food pairing dinner party, in which food writers and scientists discovered the curious affinity of tin for lamb and pistachio. One spoon ruled them all, however: as Laughlin put it, "The gold spoon is just sort of divine. It tastes incredibly delicious and it makes everything you eat seem more delicious." After tasting mango sorbet off a gold spoon, Laughlin told us, with a note of regret in her voice, "I thought, I can't believe I'm ever going to eat off anything other than gold ever again. Sadly, of course, I do."

Bee Wilson and Zoe Laughlin are guests on the first episode of Gastropod, the new podcast hosted by award-winning science journalist Cynthia Graber and Edible Geography-author Nicola Twilley. Listen to the first episode, The Golden Spoon, for many more shocking cutlery revelations, and tune in every two weeks for a new episode looking at food through the lens of science and history.

This episode, we owe special thanks to Bee Wilson, author of Consider the Fork, Zoe Laughlin at the Institute of Making, and Sarah Rich, design writer and lucky owner of gold cutlery. Artist and filmmaker Jon Cohrs gave us an engineering assist on this episode, and Vash, a freelance folk percussionist in Oregon, graciously allowed us to use a recording of him playing the spoons. We're also extremely grateful to the family members, friends, and early listeners who were so generous with their time and feedback as we got started.

Below are some additional references for stories, people, and places we mention in the episode.

The first mention of lasagna in an Italian recipe book can be found in the fourteenth-century Neapolitan Liber de Coquina. In Latin, the anonymous author instructs readers to cut dough into rectangles three inches long, boil them, and then stack them, seasoning each layer with grated cheese and pulverized spice. The recipe concludes with the stipulation that the dish should be eaten with a pointed wooden utensil (uno punctorio ligneo)—the wooden, awl-shaped spike that preceded the fork among the elite pasta-eaters of Italy. You can read the full text, in Latin, here.

The famous spaghetti eaters of Naples 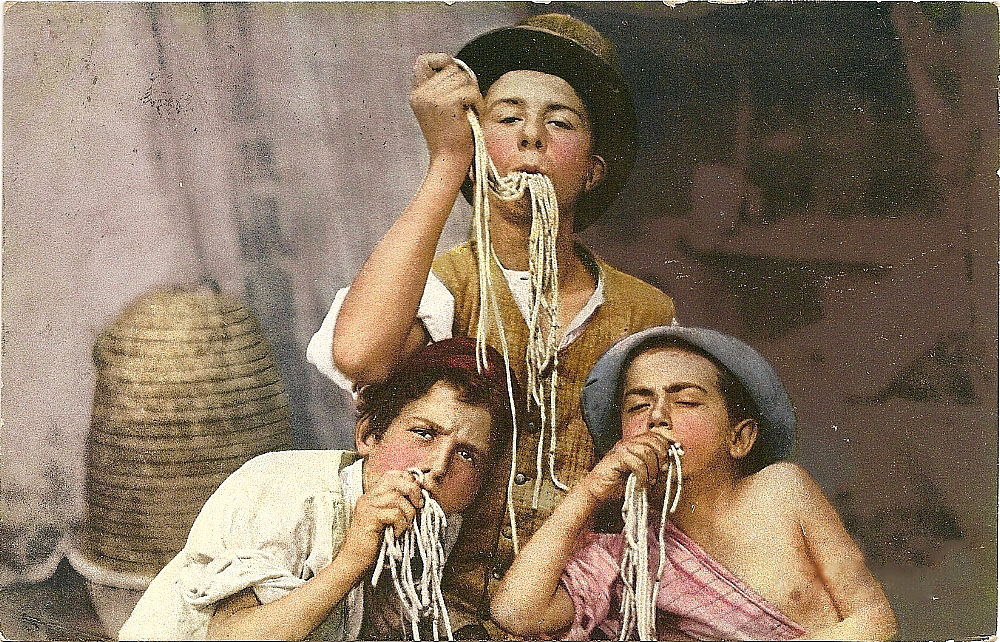 From the second half of the 1700s right up to the start of the twentieth century, tourists traveling to Naples made sure to see street children eating spaghetti, even if it meant buying a plateful for them. As Silvano Serventi writes in Pasta: The History of a Universal Food:

Numerous travelers who visited the huge southern Italian city remarked on the countless booths of maccaronari, who would proffer, in exchange for a modest sum of money, a steaming plate of macaroni, sprinkled with grated cheese, which the casual stroller would promptly gulp down, using no other utensil than his fingers. From Goethe to Alexandre Dumas, poets, renowned writers, or ordinary travelers, whether experts of cuisine or not, described with ethnological precision the gestures of the man in the street […] as he grabbed a handful of macaroni, “twisting them around their fingers with a dexterity that foreigners rarely if ever succeed in imitating.”

C. Loring Brace on cutlery and the overbite

Here's the original paper, published in the journal American Anthropologist in 1986, in which C. Loring Brace explains the relationship between the adoption of a fork at table and the European overbite. As if this shocking theory were not enough, he also includes a poem about human dentition, and some speculation on the "f"-sound as a recent innovation in human history.

Aerogel photographed at JPL by Robert. M. Brown, via.

Aerogel is an ultra lightweight, stardust-catching material used by NASA to capture grains of interstellar dust. The Institute of Making has a sample as part of its Materials Library. The preliminary findings from NASA's Stardust expedition, which returned to earth in 2006, were published in August 2014. Scientists announced that the aerogel had successfully captured 7 exotic grains of dust—the first known dust particles from outside our Solar System.

Zoe Laughlin's scientific papers on the taste of metals

Laughlin and her collaborators have published several scientific papers on their spoon research: