Taste is the oldest of our five senses, and yet perhaps the least understood. It's far more complicated than salty versus sweet: new research is dramatically expanding our knowledge of taste, showing that it's intimately connected to obesity, mood, immunity, and more. In this episode, we get into the science of how taste works, why we taste what we do, and what makes supertasters unique. And finally, we hack our taste buds—for fun, but, in the future, maybe for health, too.

For thousands of years, the sense of taste was either looked down upon or misunderstood. The Ancient Greeks thought taste was humanity's lowest and grossest sense, and the only thing many of us learned about taste in school—the tongue map—turns out to be completely wrong. In the last thirty years, however, thanks to the genetics revolution, scientists have finally started to understand more about how our taste buds work to detect chemicals in our saliva—and why. Researcher Paul Breslin and author John McQuaid help us understand the evolutionary reasons behind the five basic tastes—sweet, salt, sour, bitter, and umami—and biologist Thomas Finger compares the human ability to taste with that of cats, who can only taste umami, and catfish, which have tastebuds all over their skin and whiskers, not just in their mouths.

But while humans can all taste the same things, we taste them quite differently. For instance, some people, known as "supertasters," taste everything more intensely than the rest of the population. Supertaster sounds like an enviable X-Men-style power—but is it? This episode, we meet Linda Bartoshuk, the scientist who coined the term back in 1991, and find out how to test if we're supertasters ourselves. We discover the benefits as well as the disadvantages of having a heightened sense of taste, both today and in our evolutionary past.

Both Bartoshuk and food scientist Robin Dando are studying the connections between our sense of taste and obesity, mood, and even cancer. It's new research, and there's lots we still don't understand. But their findings raise the question: can we hack taste to help people eat better and avoid disease? From flavor tripping to digital taste devices, we try to trick our taste buds—with fascinating results.

Robin Dando is assistant professor in the Department of Food Science at Cornell University. His lab researches the biology, physiology, and neuroscience of taste, including the relationship between taste and emotion and taste and obesity.

John McQuaid, Tasty: The Art and Science of What we Eat

John McQuaid is a Pulitzer Prize-winning journalist and author of Tasty: The Art and Science of What We Eat, on the science of taste, culinary history, and the future of food.

Paul Breslin is a member of the Monell Chemical Senses Center as well as a professor in the Department of Nutritional Sciences at Rutgers University. He is a geneticist and biologist whose work focuses on taste perception. You can hear him talk more about bitter taste perception in our earlier episode, The Bitter Truth.

Thomas Finger is professor of cell and developmental biology at UC Denver. His lab studies chemoreception in humans and other animals.

Linda Bartoshuk is the Bushnell Professor of food science and human nutrition and director for psychophysical research at the University of Florida Center for Smell and Taste. She is an international leader in taste research, and she was the first to identify “supertasters”: people who have an unusually high number of taste buds and experience tastes more intensely than their fellow eaters.

To test our ability to taste PTC, we bought these strips online. We then hacked our taste buds using these miracle berry tablets. This New York Times article has more on hosting your own flavor-tripping party. A huge thanks to our long-suffering partners, Tim and Geoff, and the Pop-Up Magazine crew and performers for joining in the fun!

Don't be like us: read the instructions from Scientific American first!

The Digital Taste Interface Nicky tried is a project of Adrian David Cheok's Mixed Reality Lab, based at City University of London. 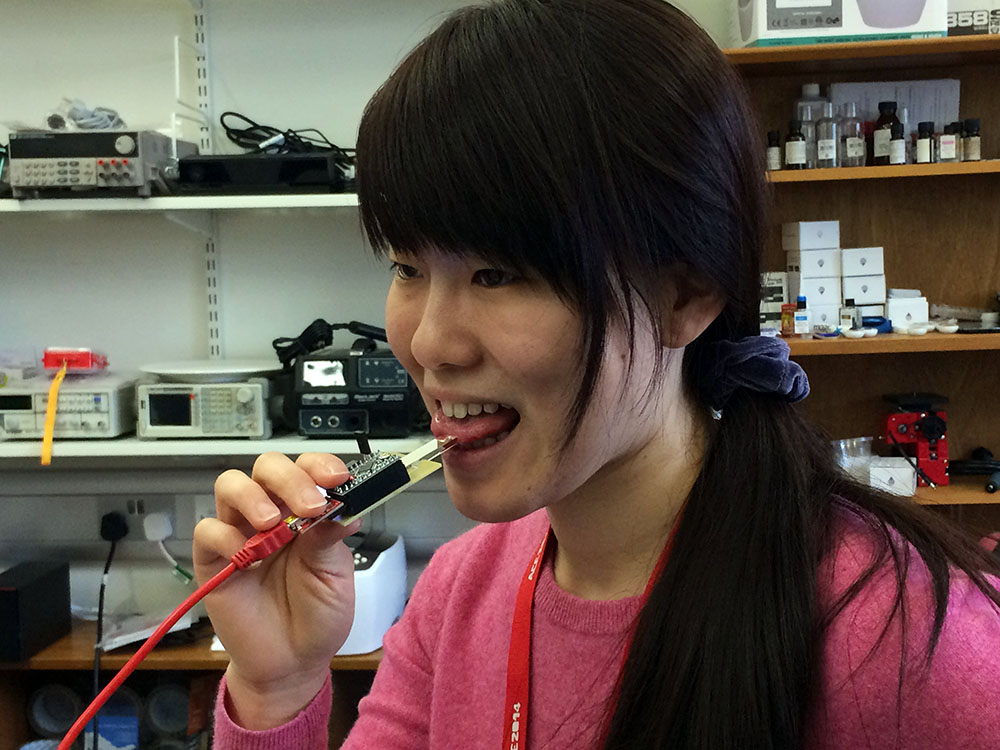 This episode of Gastropod was made possible in part with grant funding from Science News, your source for surprising and important science reporting. This week, find out the shocking portion of fishmeal fish that are perfectly good to eat and how many stressed-out stinkbugs does it take to spoil a batch of red wine?