Chicken is such a mainstay of the contemporary American dinner table that it seems hard to imagine that, just a century ago, it was rare and expensive. But over the course of the 20th century, both chickens and the chicken industry exploded in size. Much of that growth can be attributed to the miraculous properties of antibiotics, which were developed to fight human diseases but quickly began to be fed to farm animals in vast quantities. Journalist and author Maryn McKenna weaves these two intertwined tales together in her new book, Big Chicken: The Incredible Story of How Antibiotics Created Modern Agriculture and Changed the Way the World Eats. In this episode of Gastropod, she describes the consequences of decades spent feeding chicken antibiotics, in terms of chicken flavor, poultry well-being, and, most significantly, human health.

In the 1920s, chickens were not only pricey, they were also only seasonally available and not necessarily very tasty, either. Bred almost exclusively for their eggs, chickens were usually slaughtered in the fall when their egg-laying career was over. An extra zero mistakenly added to a hatchling chicken order placed by farmer Cecile Steele of Ocean View, Delaware, in 1923, followed by a nationwide contest to breed "The Chicken of Tomorrow" in 1948 changed all that. The deal was sealed with the introduction of the McNugget in 1980, and, today, Americans eat more than four times as much chicken as we did at the start of the twentieth century.

But meatier, faster-growing chickens, industrial-scale farming methods, and innovative formats are only part of the story behind chicken's growing popularity. The rise of big chicken was fueled in large part by big pharma: specifically, antibiotics. In 1948, a British scientist, Thomas Jukes, was experimenting with adding vitamins and other supplements to poultry feed. Jukes worked for a company that also synthesized antibiotics, a new genre of wonder drugs that had just begun to transform human health, and so he decided to add a tiny amount of his company's antibiotic to the feed of one of the groups of chickens in his studies. His results were astonishing: the chickens on drugs grew 2.5 times faster than the hens kept on a standard diet. News spread fast, and only a few years later, American farmers were feeding their animals nearly half a million pounds of antibiotics a year.

Today, between 70 and 80 percent of all the antibiotics used in the U.S. are given to animals rather than humans. Often, livestock are kept on low doses of antibiotics for their entire lives, in order to promote growth and prevent disease, rather than fight a one-off infection. As Maryn McKenna explains, antibiotics have transformed the chicken industry, but at an enormous cost: antibiotic resistance, or the ability of disease-causing bacteria to develop defenses against the drugs we rely on to cure illnesses and infections. The United Nations has singled out antibiotic resistance as a global crisis: they describe it as "a fundamental threat to human health, development, and security."

So how did chicken farmers become so dependent on these life-saving drugs? How did researchers tease out the relationship between drugs in our meat and deaths from antibiotic-resistant salmonella? Can we cut antibiotic use to save these crucial drugs for the future? And what would happen to the chicken on our plates if we did?

Maryn McKenna is a journalist and author whose work focuses on public health and food policy. Her previous books include Superbug: The Fatal Menace of MRSA, and Beating Back the Devil: On the Front Lines with the Disease Detectives of the Epidemic Intelligence Service. Her new book, Big Chicken: The Incredible Story of How Antibiotics Created Modern Agriculture and Changed the Way the World Eat is published in the United States in September 2017, and in the United Kingdom in February 2018. Check it out!

The Chicken of Tomorrow

We sampled audio from this fabulous 1948 documentary about The Chicken of Tomorrow contest, digitized from the Prelinger Archives.

One of the gems Maryn McKenna came across in her research is the process known as "acronization." Here's an advert for acronized chicken from 1956. Notice the lack of mention of antibiotics... Yum! 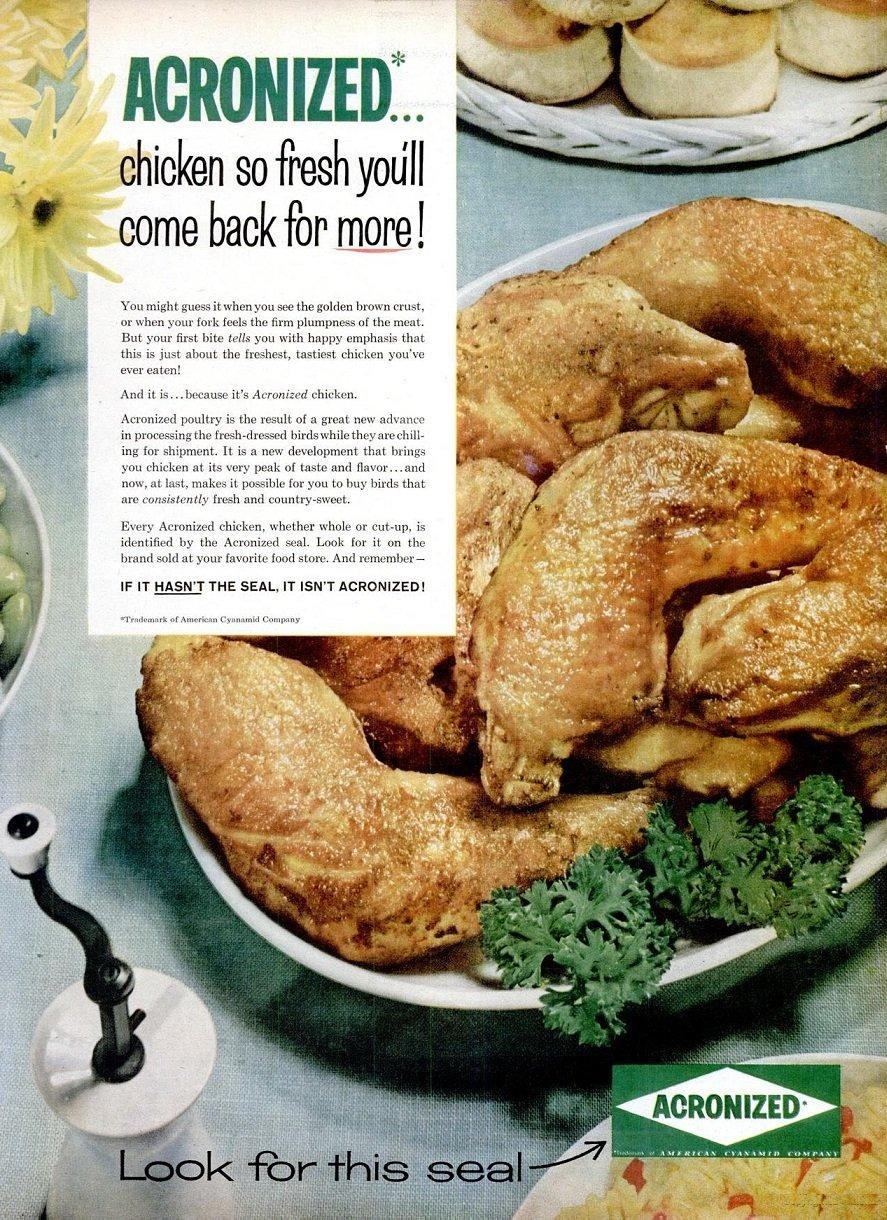