Bacon, bratwurst, bangers, barbecue: these are just a few of the many ways people around the world enjoy feasting on pigs. Of all the domesticated animals humans consume, Sus scrofa domesticus is the most fascinating, the most divisive, and, arguably, the most delicious.

In this in-depth conversation with author and historian Mark Essig, author of the book Lesser Beasts: A Snout-to-Tail History of the Humble Pig, Gastropod discovers the evolutionary source of the pigs' intelligence (scientists have judged them the cognitive equal of a human three-year-old), and why the animals' physiology so closely resembles our own. We also uncover the real reason Jews originally eschewed pork, and how pigs were the essential but forgotten weapon, alongside guns and germs, that allowed the Spanish and English to conquer and colonize the Americas. Plus, we read and review Barry Estabrook’s book, Pig Tales: An Omnivore’s Quest for Sustainable Meat, which picks up the porcine tale in the present, where Mark Essig leaves off. From helicopter hunting to manure spraying and more, join us and pig out! 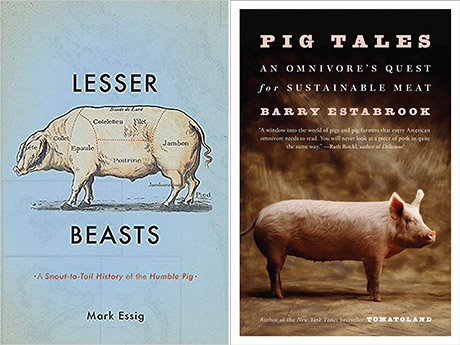 Mark Essig’s new book, Lesser Beasts: A Snout-to-Tail History of the Humble Pig, tells the story of pigs from their evolutionary origins, all the way through their complicated relationship with humans. From self-domesticated trash collectors to forbidden food, and from the Roman "pork dole" to the other white meat, Essig describes how pigs and their meat have repeatedly both reshaped and been shaped by human culture, identity, and settlement over the millennia. Read it with friends; it’s the type of book you’ll want to regularly look up from in order to share tidbits of information with anyone sitting nearby.

Essig leaves off with an injunction against current day industrial-scale pig farming, and this is where Barry Estabrook begins. His compelling book, Pig Tales: An Omnivore’s Quest for Sustainable Meat, takes readers on a tour of manure lagoons in rural North Carolina, hog houses in Denmark, and feral pig helicopter hunts in Texas. Raising complicated and important issues of antibiotic resistance, environmental injustice, and animal rights, Estabrook documents the effects of the current meat production system on animals, slaughterhouse employees, and communities living near pig farming operations. It's not all doom and gloom, however: he also shares the stories of individuals and companies in the U.S. and Europe who have taken on the challenge of raising pigs in a more ethical and environmentally-sustainable, as well as economically viable, manner.

As always, if you like what you hear, donate now to support the show! We'll enter you to win fabulous prizes—gorgeous Gastropod T-shirts, fascinating food books, and limited edition "Confused"-flavor Skittles—in the Great Gastropod Raffle. (No donation necessary to enter, though, of course, we hope you will; email [email protected] to throw your name in the hat without a donation.)