Allow us to indulge our inner aunties: We’ve set you up on a really hot date this episode—with one of nature’s sweetest fruits, the date! Adored by pleasure-seekers and paleo dieters alike, dates are a Christmas baking standby, and the first bite when breaking fast during Ramadan. These fudgy, caramelly, brown-buttery fruits are so important in their Arab homelands that they're known as the "bread of the desert" and thought to be the tree of life in the Garden of Eden story. We reveal why this episode, plus we've also got the story of how a Native American couple in Nevada may have saved the Medjool date for the world, as well as how California built an Orientalist fantasy around its burgeoning date industry, complete with Wild East shows, hoochie-coochie dances, and camel races. All that, as well as the squidgy, soft, and oh-so-sweet dates you've been missing out on—and why you might want to play the field a little in future, at least when it comes to dates. 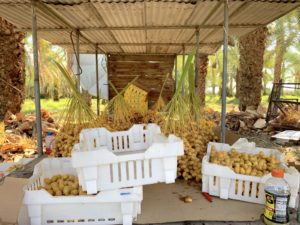 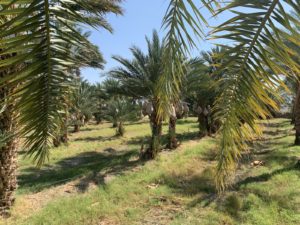 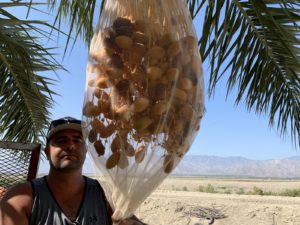 Mark Tadros, owner of Aziz Farms, with a bunch of yellow barhis 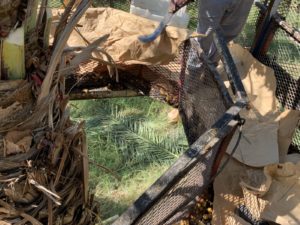 View from way up in the cage – can you spot the machete used for cutting date palm spikes and bunches? 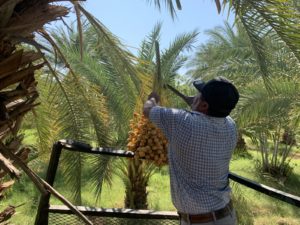 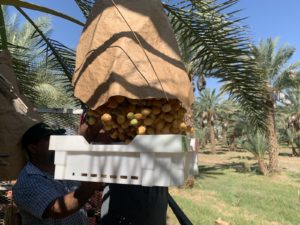 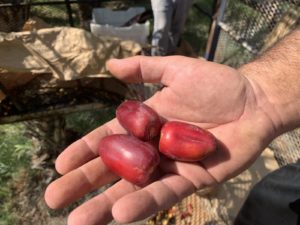 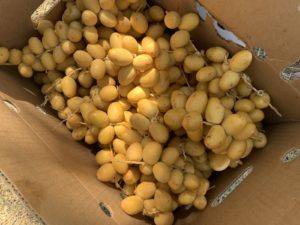 A box of yellow barhis, clipped and ready to ship 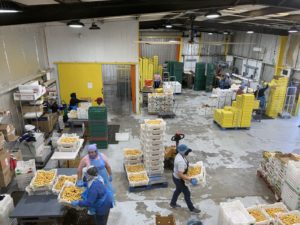 The sorting and packing facility

Mark Tadros worked as a chef before returning to take over Aziz Farms, which was started by his father, Tadros Tadros. Aziz Farms is known for their crunchy yellow barhi dates, which are typically available in August or early September. Fun fact: The farm is named after their very first date palm, which Tadros Sr. dubbed “Aziz.” The tree has passed its productive years, but Tadros won’t let anyone cut it down—it keeps watch over the rest of the orchard, a head taller than all the other trees.

Sarah Seekatz is a professor of history at San Joaquin Delta College, where her research on southern California’s date industry and its Orientalist fantasies has been supported by fellowships from the Autry National Center, The Huntington Library, and the UC California Studies Consortium. Sarah’s 2016 book, Indio's Date Festival, was based on her PhD dissertation.

Nawal Nasrallah is an award-winning Iraqi food writer and author of Dates: A Global History. Nawal was a professor at the universities of Baghdad and Mosul, teaching English language and literature until 1990. Her most recent book, reviewed here in Atlas Obscura, is titled Best of Delectable Foods and Dishes from Al-Andalus and Al-Maghrib: A Cookbook by Thirteenth-Century Andalusi Scholar Ibn Razīn Al-Tujībī (1227–1293).

Michael Purugganan is a professor of biology at NYU in New York and Abu Dhabi, where he studies plant evolutionary genomics. Michael is the principal investigator of a project that studies the genomic diversity of date palms and their wild relatives. He is the recipient of an Alfred P. Sloan Foundation Young Investigator Award, a Guggenheim Fellowship, is a Kavli Fellow, and in 2005 was elected a Fellow of the American Association for the Advancement of Science.

Special thanks to Deborah Thirkhill and the team at Arizona State University; Dareen Jubeah, who taped the iftar feast in Jerusalem for us; and Yadira at Shields Date Garden, who helped us find all those date varieties to sample. Here’s the list of date varieties we tried: Yellow crunchy Barhi, brown Barhi, Medjool, Abbada, Deglet Noor, Black Beauty, Blonde, Zahidi, Khadrawi, and Brunette. Michael's favorite is the Sokari date, which he orders from here.