A chemical that kills the plants you don’t want—weeds—and keeps the plants you do—food!—seems kind of like magic. After all, weeds are the bane of farmers' lives, causing tens of billions of dollars in lost yield every year. So why is the world's largest herbicide company, Monsanto, so unpopular that it's been referred to as MonSatan? How harmful are today's herbicides for us humans, and for the environments they're seeping into? And do we need weedkillers to feed the world? In part two of our three-part series on weeds, we take on the big questions around this “bad seed” of the farming world—and the fascinating story behind the scrappy St. Louis startup that hooked the world on herbicides.

Bart Elmore is a professor of history, focusing on the environment and business, at Ohio State University. While reporting a book on the history of Coca-Cola, he came across Monsanto's origins producing caffeine and saccharin for the company, which planted the "seed" for his book Seed Money: Monsanto's Past and Our Food Future. 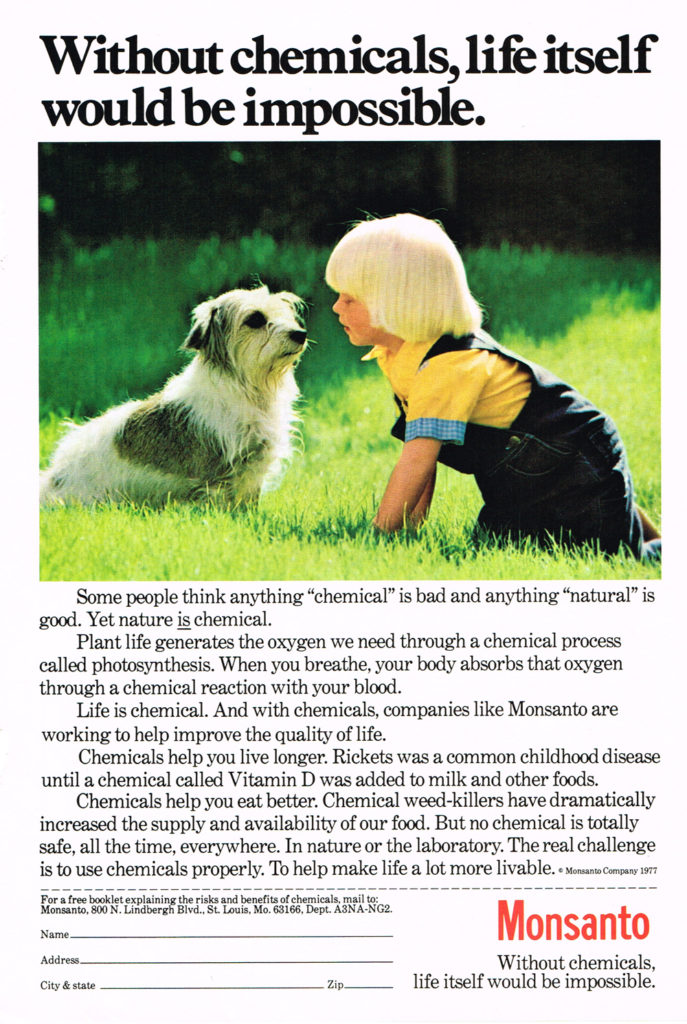 A Monsanto ad that was featured in publications like National Geographic in the late 1970s, when they and other pesticide makers were facing the fallout of how the herbicide "Agent Orange," used in the Vietnam War, had caused health problems for soldiers and civilians. (Image source: Jamie/Flickr)

Investigative journalist Carey Gillam has reported deeply on American food systems, both in the field with farmers and behind the scenes of agribusiness and government regulation. Her books include Whitewash: The Story of a Weed Killer, Cancer, and the Corruption of Science and The Monsanto Papers: Deadly Secrets, Corporate Corruption, and One Man's Search for Justice.

Michelle Mart is an associate professor of history at Penn State Berks, where she focuses on environmental history, American culture, and foreign policy. She is the author of the book Pesticides: A Love Story, which she researched in part while a Rachel Carson fellow at the Ludwig Maximilian University of Munich.

In this episode, the first in our three-part weed series, we tried to figure out what a weed actually is, while tagging along on the once-every-twenty-years adventure that is the world's longest-running biology experiment, the Beal Seed Experiment.