Juicy, crispy, crunchy...fried chicken is undoubtedly delicious. But it's also complicated, in ways that go far deeper than the science behind that perfect crust. From slavery to entrepreneurship and from yard fowl to Gospel bird, the story of fried chicken is filled with challenging contradictions. Grab a drumstick and listen in.

2016 is, according to Eater, the year of the fried chicken. America is in the middle of a "fast casual fried chicken explosion," while Britain's transatlantic love for Southern-style fried chicken is being blamed for the decline of traditional roast beef. Meanwhile, Korean, Japanese, and many other global variations on the battered bird are finding new fans in the West, too.

Inspired, Gastropod decided to take a closer look at the science and history behind this iconic dish. It turns out the origins of fried chicken are largely unknown, according to John T. Edge, author of Fried Chicken: An American Story. Psyche Williams-Forson, author of Building Houses out of Chicken Legs: Black Women, Food, and Power, says that, while we can no longer be sure whether it was African slaves or Southerners of European descent who first decided to bread and fry these stringy yardbirds, we do know that West Africans have a tradition of frying food in hot oil, and that fried chicken as we know it today originated in the South.

Former slaves, particularly women, eventually used their hard-won chicken-frying expertise to become successful entrepreneurs, Williams-Forson tells Gastropod. And then, decades later, a certain Harland Sanders bleached his beard white and dressed up in a white suit with a bolo tie in order to sell his own fried chicken, capitalizing on racist nostalgia for the old plantation-era South. Today, fried chicken offers a key to the American dream for immigrants from around the world, all of whom put their own spin on the bird.

From racist stereotypes to the sustenance and hope embodied in the Chicken Bone Express, this episode of Gastropod follows the complicated, often contradictory stories of fried chicken in America. Sacrifice, entrepreneurial zeal, ethnicity, assimilation, racism and its impacts on America—these are the powerful narratives embedded in fried chicken, according to John T. Edge, and they are the reason the dish has become iconic. Its savory gastronomic pleasures are, he says, just a bonus. 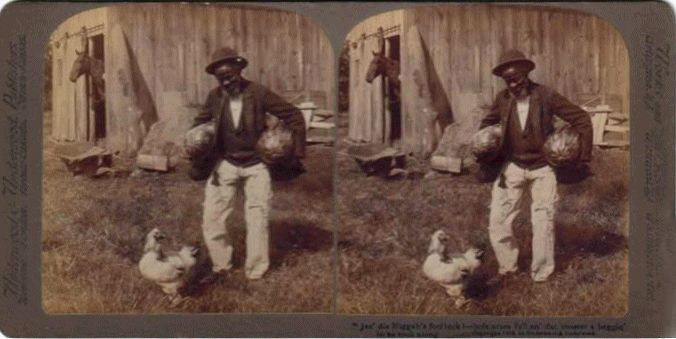 Stereoview image, c. 1904, from the collection of Psyche Williams-Forson. The caption reads: "Jes' dis Niggah's fool luck!—bofe arms full an' dat rooster a beggin' to be took along."

Nonetheless, there's some science to reliably achieving poultry perfection and avoiding the disappointment of soggy, under-cooked, or dry drumsticks. We invite Kenji López-Alt, author of The Food Lab, back on the show to share his surprising technique for perfectly crispy, juicy fried chicken. Everything else about the dish may be complicated, but biting into that hot drumstick is pleasure, pure and simple.

John T. Edge directs the Southern Foodways Alliance at the University of Mississippi. He is the author of Fried Chicken: An American Story, and has written and edited more than a dozen other books.

Psyche Williams-Forson and Building Houses out of Chicken Legs

Psyche Williams-Forson is associate professor and chair of the Department of American Studies at the University of Maryland. She is the author of Building Houses out of Chicken Legs: Black Women, Food, and Power.

Hood Forts is a participatory film-making initiative for young people run by the Mile End Community Project. Their 2014 short film explores the role of fried chicken in East London.

In episode 42 of their podcast, Another Round, Heben Nigatu and Tracy Clayton discuss the battleground that is fried chicken.

Kenji López-Alt and The Food Lab

Kenji López-Alt is managing culinary director of Serious Eats. His column, The Food Lab, was launched in 2009; his book, The Food Lab was published in September 2015 and featured on a previous episode of Gastropod.

Hillary Dixler is senior reports editor at Eater. In July 2015, she wrote an article titled "Why It's Finally Time for a Fast-Casual Fried Chicken Explosion."

Tony Maws followed the success of his first restaurant, Craigie on Main, with Kirkland Tap & Trotter (just blocks away from Cynthia in Somerville, Mass.). They offer their delicious fried chicken every Sunday, beginning in the early afternoon.

Fried Chicken and a Country Tune

Fried Chicken and a Country Tune by Billy Edd Wheeler was released in 1969.